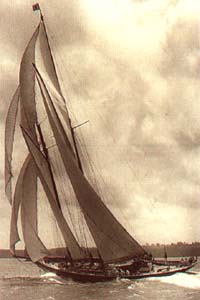 Alfred Edward Beken, originally from Canterbury in Kent, moved to the Isle of Wight in 1888 with his son Frank and purchased an existing pharmacy situated in the small port of Cowes, famous for its International Sailing Regatta. The sight of yachts sailing past his bedroom window made such an impression on Frank that he decided to capture these images on film.
After several attempts it was soon obvious that the cameras available at the time were not suited to the rough seas encountered, so Frank designed and had built a new style of camera. Instead of the usual canvas bellows, he used two wooden box-frames. One enclosing a screw-thread focussing system and shutter, with the other frame housing a viewfinder. It was in fact a forerunner to the later twin-lens cameras although his was fired by biting a rubber ball held between the teeth!

It was Frank's bedroom window that also provided the light source for his 'daylight powered enlarger' which enabled him to make saleable prints from his negatives.
The Beken Pharmacy sold these photographs alongside their medicines and perfumes and undoubtedly due to Queen Victoria's Royal residence being nearby at Osborne, it was recorded that five crowned heads of Europe visited the Pharmacy premises at one time! 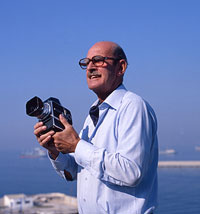 Frank was joined by his son Keith in the 1930's. Keith had qualified as a chemist and during WW II skippered an Air Sea Rescue launch based in Cowes. Keith photographed the famous J-Class, started the colour photography in the 1950's and later took his cameras to various sailing regattas in the Mediterranean and Caribbean.
Frank died in 1970 and it was decided that the pharmacy should be sold and the photography side of the business should stand alone. Keith was joined by his son Kenneth and a new company called 'Beken of Cowes' was

established exclusively photographing afloat and selling the marine photographs that have made the Beken name famous throughout the sailing scene.
The Beken of Cowes Marine Photography Gallery is now popular with yachtsmen from all over the
World who come to see the classic historical photographs as well as the colour images taken of today's racing and cruising craft. Those unable to visit access the Beken website at www.beken.co.uk
Keith retired from photography afloat in the mid 1990's after taking the famous photograph of the "Silk II" pitch-pole incident.
Keith died in February 2007, aged 92.

Keith's son Kenneth joined "Beken of Cowes" to become the third photographer in line taking the photographs that have made the Beken name famous throughout the sailing scene. In over 45 years he has covered Worldwide gatherings such as Tall Ship Races, Offshore Powerboat Races, America's Cup Races, International Sailing Regattas, plus numerous Dinghy & Windsurfing events.

Beken started their photography in 1888 when Alfred Edward Beken (1855-1915) came to Cowes & opened a pharmacy. It was his son Frank (1880-1970) who was so impressed by the classic yachts sailing off Cowes that he started the Beken Marine Photography Archive. In 1914 the ‘West’ collection of glass plates dating back to 1880 was purchased to add to his growing collection of negatives. By the 1930’s Frank’s son Keith (1914-2007) was busy photographing afloat and in 1970 Keith’s son Kenneth (b.1951) joined the Company. Each generation has earned the title “Fellow of the Royal Photographic Society” and the Company has held three Royal Warrants for excellence. More recently in 2001 staff colleague Peter Mumford became actively employed photographing afloat adding to the modern digital colour library.

Early 12” x 10” photographs dating from the turn of the last century up until the 1930’s, have fetched £1,000 at London auctions, more for larger or framed examples. These photographs were signed Beken & Son, carried an embossing stamp, were titled by Frank Beken himself and printed close to the date the actual photograph was originally taken .

Later hand-printed Sepia-Brown enlargements, (ie 1945-1970) are estimated at a value of £200 to £500. Should you be considering the sale of any Beken & Son titled print, we would recommend you contact a good auction house to get an appraisal. The bigger auction houses in the UK usually hold regular local-to-you monthly valuations and advertise their dates in local newspapers or on their websites.

In 2005 Beken changed to taking their photographs digitally. In 2008 with the advancement in the quality of digital printing came the move to supply all prints digitally too, and after 120 years of service the darkrooms were finally closed. Beken have a small range of Silver Gelatine Photographs left which they sell from their Gallery in Cowes.

Virtually all the original glass plates & transparencies are intact and are individually scanned & enhanced to create today’s high quality prints which still receive a great deal of hands-on attention. Today’s digital prints are now signed simply: Beken & it is felt that these prints are every bit as good as those once produced in their traditional darkrooms. Beken now produce top quality signed & numbered Limited Edition archive Prints.

Please be advised that Beken images have been published as Books, Calendars, Cards & Posters, which when framed can look like a real photograph but are not designed to last when exposed to strong light.

Also, should you own a Beken print or photograph, the Copyright remains with Beken and reproduction, replication & copying – even in paintings - is only permitted under licence.